“All of life is a stage – an exciting, perilous adventure that demands your whole concentration. I’m at home in each of the performing arts, whether opera, theatre, operetta, musical, song recital, film, or performance.“ Paul Schweinester

Internationally acclaimed Austrian tenor Paul Schweinester is at home in all areas of classical music.

The corona pandemic has thrust the European cultural scene into a difficult period; 2020 was supposed to be a year full of exciting projects for Paul Schweinester:

Paul opened the 2019-2020 season at the Vienna Volksoper with the Austrian premiere of the opera Das Gespenst von Canterville, by Marius F. Lange. Immediately following, he participated in a new production of Salome at Theater an der Wien, where he was originally cast as the First Jew. On a day’s notice, he additionally took on the part of Narraboth, delighting audiences in the double role. He also sang Brighella in Ariadne auf Naxos with the Bavarian State Opera in Hong Kong, a role he had already performed several times at the Royal Opera House in Covent Garden, London. In spring 2020, Kirill Petrenko conducts him as Jaquino in Fidelio in Baden-Baden and Berlin; he will reprise the role later in the season in the Philharmonie de Paris as well as in Hong Kong, making it an established part of his repertoire. Highlights from recent years include his appearances at the Palais Garnier in Paris and at the Salzburg and Bregenz Festivals. He sang the role of Adam in Carl Zeller’s Der Vogelhändler at the Seefestspiele in Mörbisch, appeared as Edwin in the Csárdásfürstin at the Stadttheater in Bozen, and played Doctor Siedler in Im weissen Rössl at the Cologne Opera. In summer 2020 he will debut a new leading role, playing Tony in Leonard Bernstein’s West Side Story at the Seefestspiele in Mörbisch; this achievement will be underscored by a live television broadcast on the Austrian television network ORF 3.

A CD recording of Entführung aus dem Serail, together with Diana Damrau and Rolando Villazón, was released on Deutsche Grammophon in fall 2016. Its success led to a second collaboration, in which Paul Schweinester recorded the role of Monostatos in The Magic Flute.

The singer/performer relishes the challenges of contemporary opera: he appeared as Toni in Elegie für junge Liebende at Theater an der Wien and sang the part of Josef Powolny in Friedrich Cerha’s Onkel Präsident at the Prince Regent Theater in Munich. He also sang François Deschamp’s Jean und Gilles at the Sirene Operntheater in Vienna.

Paul Schweinester’s numerous appearances with renowned orchestras and conductors are a testament to his international appeal. In fall 2017, he performed Bach’s Christmas Oratorio with the Gaechinger Cantorey under the direction of H.C. Rademann at the Baden-Baden Festspielhaus, the Gasteig in Munich, the Stuttgart Liederhalle, and at the International House of Music in Moscow. On New Year’s Day 2018 he sang Haydn’s The Creation in the Bela Bartok Hall in Budapest. He toured Spain and France, singing the St Matthew Passion with the Musiciens du Louvre under Mark Minkowski. At the “Grafenegg In Spring” festival he sang the arias from the St John Passion with the Tonkünstler Orchestra; he also performed Mozart’s Requiem with Paul Langrée and the Camerata Salzburg in Colombia.

Paul Schweinester has a passion for Lieder. Concerts at the NDR Studios in Hamburg, Jeunesse in Vienna, the Schubertiade in Schwarzenberg, the Brahms Festival in Mürzzuschlag, and the Austrian Cultural Forum in New York are proof of the depth of his commitment to the genre. The singer is featured with his own adaptation of “Die schöne Magelone” by Johannes Brahms at the newly opened House of Music in Innsbruck.

Performing sophisticated dance music at the magnificent balls of Vienna is another of the singer’s regular occupations; he has appeared at the Philharmonic Ball, the Kaffeesiederball, the Kaiserball, and many others. Backed by the orchestra Divertimento Viennese, Paul Schweinester enchants ballrooms with classics from the 20s and 30s such as “Für eine Nacht voller Seligkeit” and “Die Nacht ist nicht allein zum schlafen da”. This is music close enough to touch. 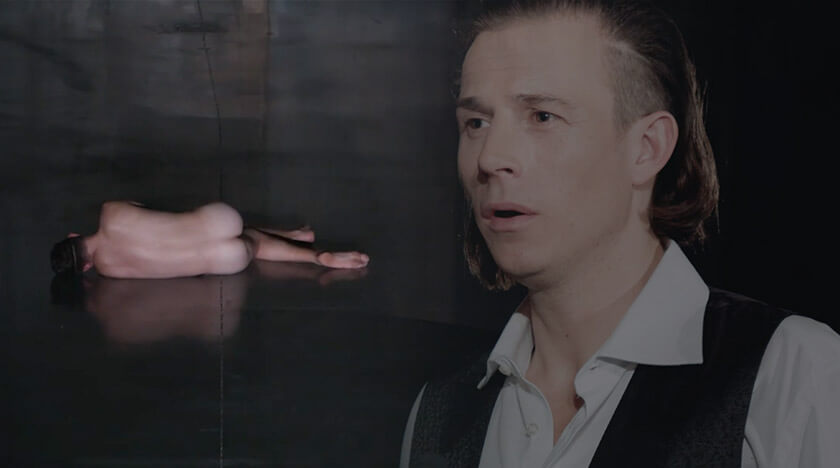 A very special presentation of “Die Schöne Magelone“: These poems, set to music by Johannes Brahms, are supplemented by a staged reading conceived exclusively for the occasion. The listener accompanies the young protagonist on an emotional journey through the world of his own feelings, on the dangerous path to fulfilling love…

The stage: a codex through
which my person
is transformed into art.

As all cultural events have been cancelled until further notice due to the Corona virus, Paul cycles as courier through Vienna. He delivers not only parcels and flowers, but also the occasional musical greeting.

Events in the past